Posted on 27 August 2018 Categories: Uncategorised No comments yet 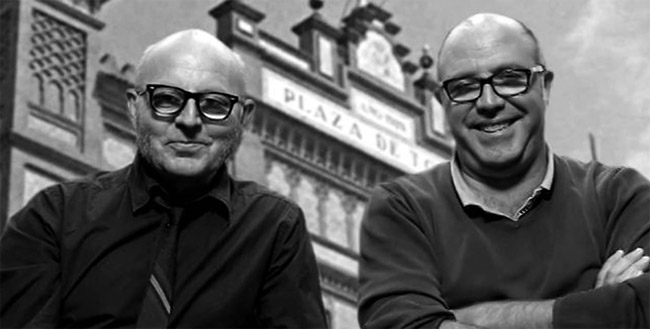 La Cuadrilla’s 1994 Justino: A Senior Citizen Killer (Justino, un asesino de la tercera edad) is a cult Spanish film about a retired “puntillero” (the man who finishes off the dying bull in the bullfighting ring with a stab in the neck), who begins a new career as a serial murderer. Justino engages with Spain’s vast tradition of black comedy, brimming with backwards glances and allusions to its rich heritage. If the film at first seems like a simple rehashing of Marco Ferreri’s The Little Coach, it soon becomes clear that its references extend in many different directions, engaging such distinct works as Edgar Neville’s 1946 detective thriller The Crime of Bordadores Street and Fernando Fernán-Gómez’s 1986 Goya Award winner Voyage to Nowhere. Justino takes full advantage of its having been made after the end of the censorship restrictions of the Franco regime, and the creative duo La Cuadrilla (directors Santiago Aguilar and Luis Guridi) revive the figure of the retired man that appears in The Little Coach and Luis García Berlanga’s Not on Your Life. (Film Society Lincoln Center)

Probably one of the most repeated questions amongst Spanish cinephilia, what happened with La Cuadrilla? Ahead of the screening of Justino, A Senior Citizen Killer in Edinburgh as part of Scalarama we had a chat with La Cuadrilla duo, a cinemattic phenomenon that, like best things in life, lasted very little.

How does Justino connect with other Spanish black humour classics like Berlanga’s Executioner or Fernan Gomez’s The Strange Voyage ?

Justino connects “umbilically” with The Executioner and The Strange Voyage through our admiration for these two duos of screenwriter-director who formed Rafael Azcona and Luis G. Berlanga and Pedro Beltrán and Fernando Fernán-Gómez. I wish we were stuck with some of them… We always consider that the grotesque tragedy and the ‘Esperpento’ were the two most thorough ways to understand (and laugh at) The Spanish. So in the case of Justino, A Senior Citizen Killer, a film that portrays the backroom of the bullfighting world, we found that that black comedy filiation would me the more coherent with our goal.

Given the latest developments with pensions and our retirees in Spain. Do you think this movie is more valid now than ever?

More valid we do not know… Justino is an individualist in an individualistic society, as was the hangover of 1992. The current social mobilization around retirement pensions probably would have served to channel Justino’s aggressive spirit against conformity in a less drastic manner than choosing serial crime. If this mobilization, as is foreseeable, ends with no notable achievements, we will be again in a similar scenario that would inevitably drive to more people going for “I grab what I can” in the way Justino does.

Can we talk about Justino, A Senior Citizen Killer as a road movie?

We never thought of it as such. In fact, it ends where a road movie would start. Basically, it is a comedy with quite ‘mala leche’ (bad blood) on a character that is redeemed with the audience thanks to his friendship with the character of Sansoncito.

What prevails of that society that we see in the film? I mean the increase in loneliness levels especially in the elderly and the increase in the feeling of failure within a society increasingly obsessed with goals unattainable by the majority.

This is increasing indeed due to the progressive ageing of the population and the precariousness in which we all move. Justino is thrown into a world that is not his own: it is the world of his children, the famous Spanish property bubble, new rich eager of triumph on the 90s. The reasons behind Justino’s actions were easy to be understood by us. However today, in a society with hardly a middle class, with a large mass of disadvantaged population regardless of their age, the line that separates “good and bad” is much more blurry, and would force us to be more thorough on our analysis.

Would it have been possible to base this film on a provincial city? Smaller than Madrid?

Justino is essentially a Madrid film, not only because of the popular environment in which it develops -bars, pensions, lenders…- but also because of the Metro (Underground) or the macro-residency Shangri-La facilitated an anonymity that made things much easier for the story. In a small town, where everyone knows each other, Justino would have fallen into the hands of the police in twenty-four hours.

Is Justino a reflection on the damage that the evolution of our society brings about their individuals?

We don’t pay that much attention into this. If the audience want to do it besides laughing, it won’t be us who tell them not to.