Part of CinamaAttic’s LADS: TOXIC MASCULINITY, a programme that denounces toxic masculinity attitudes in communities around the world.

A screening of artists’ moving image followed by a trans-led group panel.

22:30: Audience is warmly invited to stay and socialise at Saramago

In this programme, we will explore queer and kinky elements in three artists’ moving image works. A panel comprised of trans practitioners will follow the screening, and each panel guest will further expand on different themes and motifs recurring through the works.

The main curiosity will be directed at the body as a meeting point between subjectivity and social expectations and restrictions.

Living within a culture of dominance that uncritically replicates automatic beliefs and behaviours, often leads to the accumulation of trauma in the body, and its protection and veiling by feelings of shame and fear. This is especially true for people whose *intersecting identities are underrepresented in the dominant culture.

Countering this, the altered state, permission for experimentation, and safety measures that are available in the kink, filmmaking, and performance toolkits, offer a space to go deep and re-examine the sediments that experiences of oppression deposit in our bodies and minds.

As the event name suggests, being in that space can be uncomfortable and scary, as well as playful, humbling, and humorous. Creative, open and responsible engagement can open a ‘portal’ to processing past experiences and enhancing awareness, embodiment and resilience; allowing us to test out new ways of relating to ourselves, to prevailing beliefs, and to each other. 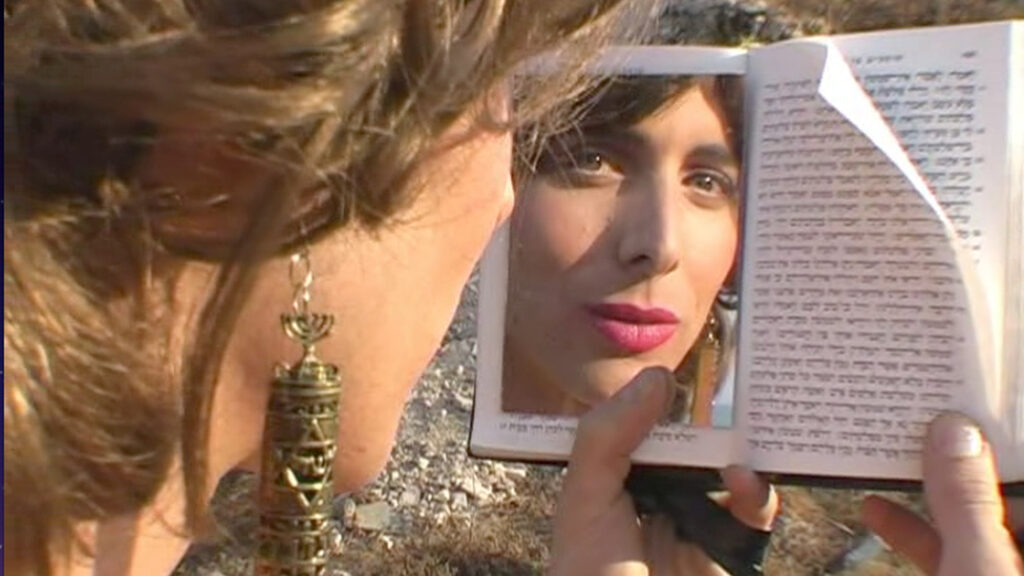 Still image from ‘One Summer Evening’ by Gil Yefman

Content note: religious artefacts repurposed as feminine garments and accessories. Mention of gender barriers in traditional use of these objects.

Mention of sex work in the poem (poking at societal hypocrisy toward sexual needs and expression).

In this work, the artist’s body is integrated into the kinetic mechanism of a sculptural mortar machine. Strapped to its place with the caress of a corset, his body takes part in a perpetual closed loop of charge and release, pain and pleasure, cause and effect.

Left to right: still images from ‘Out’ by Roee Rosen, ‘One Summer Evening’ by Gil Yefman, ‘Davidka’ by Lior Shvil.

Chris (they/them) is a trans, neurodivergent psychotherapist and DE&I consultant. They are the Founder and Managing Director of The Queer Therapist, a UK based online therapy service providing GSRD (gender, sexuality, relationship diversity) therapy and neuro-affirming therapy. They are also the Lead Psychotherapist at Voda.co, the LGBTQIA+ mental health app, Clinical Associate at Pink Therapy, Board Adviser for Soho House’s Inclusivity Board and Fellow at Royal Society of Arts. They work to challenge stigma and shame around gender diversity and neurodivergence.

Michael (he/him) is a gender non-conforming hoodooist, spiritworker and multidisciplinary artist. A specialist in cartomancy (divination through tarot, oracle, and playing cards) and African American folk magic, his work functions to revive and preserve the stories, magicks, and medicines of the African and Indigenous American diaspora as a form of political resistance.

We would like to honor a commitment to your safety and wellbeing.

Please take the time to go over the description of the works we will screen and their respective content notes. The themes of the video works and the panel discussion have been sensitively chosen and consciously contexualised, but experiences are subjective and distressing experiences might come up while watching.

Please feel free to take breaks when you need them. We will have support workers present in case the need arises.

We ask that attendees please do not film or take any photos, or videos during the event.

The panel will be documented for online sharing in future.

The event is designed as a trans and queer safe, kink friendly and anti-racist. Folks for whom these areas of experience are new, please be gentle with yourself and others and practice curious listening.

Please respect out identities by asking for people’s pronouns and respectfully using them.

You cannot assume someone’s gender identity from the way they dress, their body language, etc. Please respect personal space and avoid asking questions you wouldn’t like to be asked yourself.