Join us for a special culinary screening of Sílvia Subirós’ LA CUINA DELS HOMES, sharing this award-winning documentary alongside a Catalan inspired Menu on Sunday 22nd January at Tapas3

In MEN’S COOKING / LA CUINA DELS HOMES with archive material and family super 8mm tapes, director Silvia Subiros reflects on the silenced role of women in the history of cooking and haute cuisine, as well follow her own family story behind the revered El Motel, one of the restaurants that brought culinary modernity to Spain.

The film will be followed by a traditional Catalan cuisine menu consisting of several dishes full of Mediterranean flavours. Including Selection of pinchos (as an aperitif), Plate of Pan Catalan/Embutidos/Boquerone, Escalibadas, Mar i muntanya, Patatas Bravas con alioli and Crema catalana as a dessert. 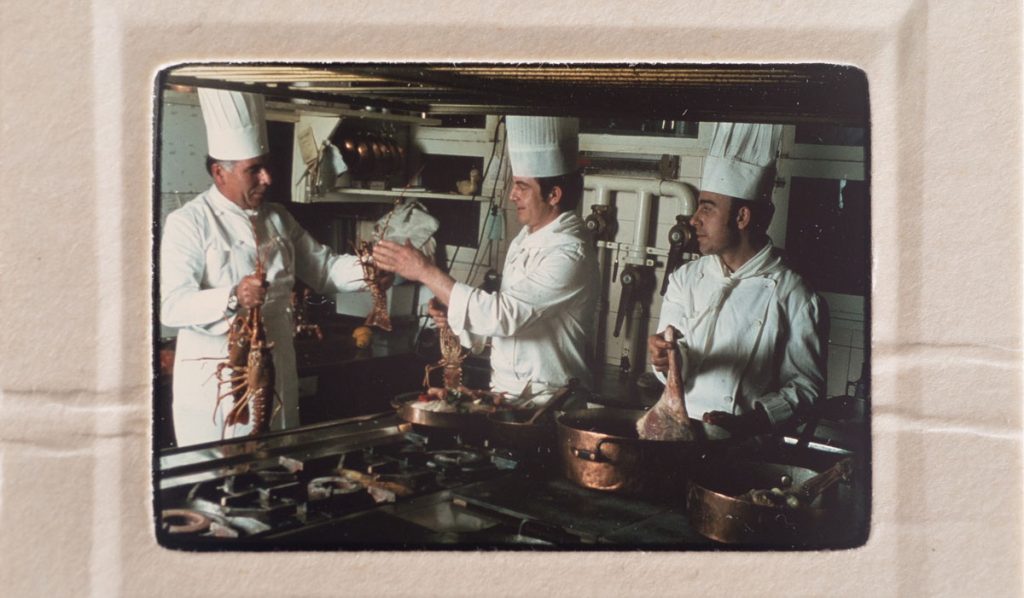 With archive material and family super 8mm tapes, director Silvia Subiros reflects on the silenced role of women in the history of cooking and haute cuisine.

Men’s Kitchen (Cuina dels Homes) takes on this paradox and navigates the personal and the political, starting from her personal story – as a direct heir of El Motel, the restaurant that brought culinary modernity to Spain- to reflect on the wider political implications on the lack of equality in the household.

“My grandfather was a renowned chef and created “El Motel”, the restaurant where I grew up. My father and brothers have also dedicated themselves to cooking and have continued the legacy. In the family archives I find my grandfather’s camera and 8mm films, where is my grandmother who films, who has always been an anonymous character for me. Based on these images and with archival material, I wonder what has happened to the women in my family and why I didn’t go to work in the kitchen” (Sílvia Subirós)

“Subiros digs in the archives and recovers Super 8mm films made by his grandfather to build a thesis: how women have historically been separated from the heaven of the great chefs” (El Pais)

Summary
Event
​CULINARY SCREENING AND CATALAN GASTRONOMY
Location
​ Tapas 3, 6 Howden Street,Edinburgh ,-EH8 9HL
Starting on
22/01/2023
Ending on
22/01/2023
Description
What is a celebration without a good banquet? Join us on the 22nd of January to celebrate CATALAN GASTRONOMY at Tapas3. Our Gastronomic event of the festival. Come and taste a typical Catalan Menu cooked by our friends at tapas3. We will show this documentary CUINA DELS HOMES by Silvia Subirós. SYNOPSIS For Mrs Subirós family, cooking has always been the most important thing. Her grandfather Josep Mercader was a renowned chef. He created the Motel, a restaurant that became an emblematic place of Catalan culture. Her father and brothers have continued with her grandfather's legacy using family archives she reconstructs this story for us. The screening will be followed by a typical degustation menu of Catalan Cuisine. We will have the chance to seat down and go through the works from the aperitif till the dessert. During the duration of the festival in Edinburgh there will be a set menu available @ Tapas3 offering a selection of Typical Catalan Dishes.
Offer Price
GBP 25
Buy Tickets